The movements are characterised by:

Sometimes the coil is on the balance wheel and the magnets are on the base plates, but it is more common to find it the other way around. Because a transistor can act as switch, these were the first battery-powered watchs that no longer needed a physical electrical contact. The days of worn-out, sparking contacts were over.

This system was invented, and patented, by Etablissements Leon Hatot (ATO) in the early 1950s. As a result, millions of watches carry the ATO or Lic. ATO mark either on the movement plates and / or on the dial. You can see this quite clearly on this Nivada dial.

In the early 1960s, Omega experimented with transistor controlled balance wheel watches, but none were ever brought to market. Very little is known about them but I have been sent a couple of scans of these unique movements; you can find them here in the Omega section of this website.

The movement below is the only Bifora electric / electronic movement to reach production. The same movement was used in both the ladies (B10) and mens (B11) watches; see the men’s watch here. It runs at 36,000bph and is characterised by two coils on the balance and four permanent magnets.

The Bulova Caravelle 12 OUCD movement is the same as the Citizen X-8.

Judging by the number of watches that are still around today, running quite happy with these movements, the Dynotrons must have been a very successful movement for ESA. In addition, many watch companies employed Dynotron movements in their watches. There were four main calibres:

In addition to the four main calibres above, there was also:

The Junghans 600 or “Ato-Chron” appeared at roughly the same time as the ESA Dynotron. It was the first German transistorised movement. Sheffield also sold these movements (below): this one came from the Wedgefield watch

The 1971 West German Porta PUW 2001 (with date only) has the coil on the balance wheel, three fixed magnets with separate electronic components (3 transistors, 3 resistors and 1 capacitor). These rare watches were only produced for a very short time. There is also a PUW 2000 without day or date and PUW 2002 with date and day.

The Porta PUW 2500, 2501 and 2502 movements moved these individual electronic components into a single integrated circuit. 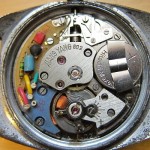 A rare Chinese transistorised movement from the 1970s. Read more about it on the main Xiang Yang page.